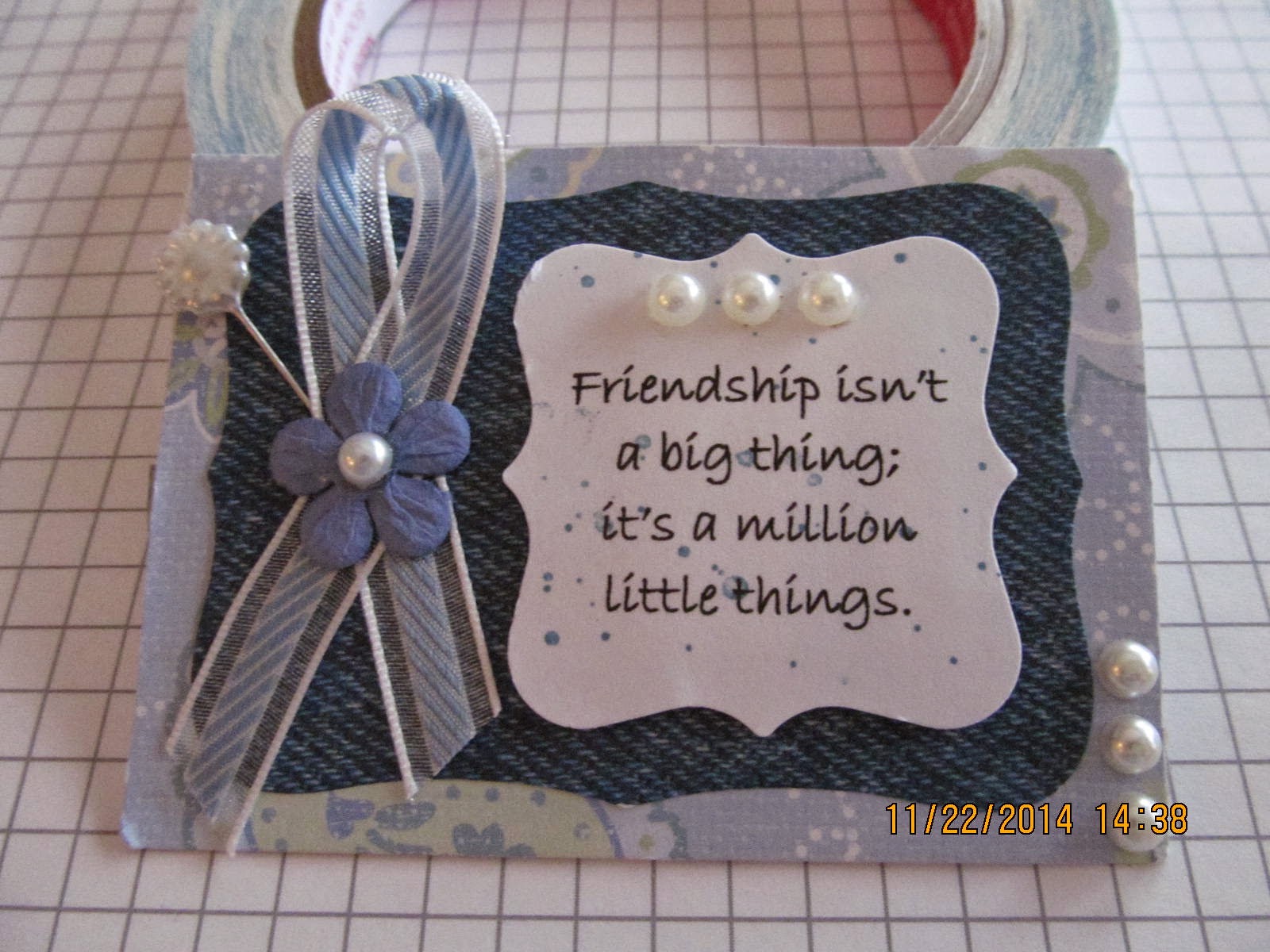 It came out really well, don't you think?!
I also have a gift that I made for a "Secret Sister" but I can't show it to you because she may pop on over to take a peak and I don't want to ruin the surprise. So I'm going to have to wait until after December 17th.
Stay tuned.
Posted by Sandi at 5:29 PM 1 comment:

Well Hello there!  It's been a while.  My bad!
Well Now that I'm here I have a few things to share with you.  First off, I found out two weeks ago that I am completely CANCER FREE!!!  WOOHOO!!!  Yes, THAT is a very BIG load off my shoulders. I am having my port taken out this Friday and that is the last procedure to be completed!  I still need to have a bone density test done, and reconstruction, but WHO CARES!  NO MORE CANCER!!

So now on to some fun stuff---
I received a card from my childhood friend, Evelyn.  See her BLOG HERE she does AH-MAZING work! This is the card she sent me! 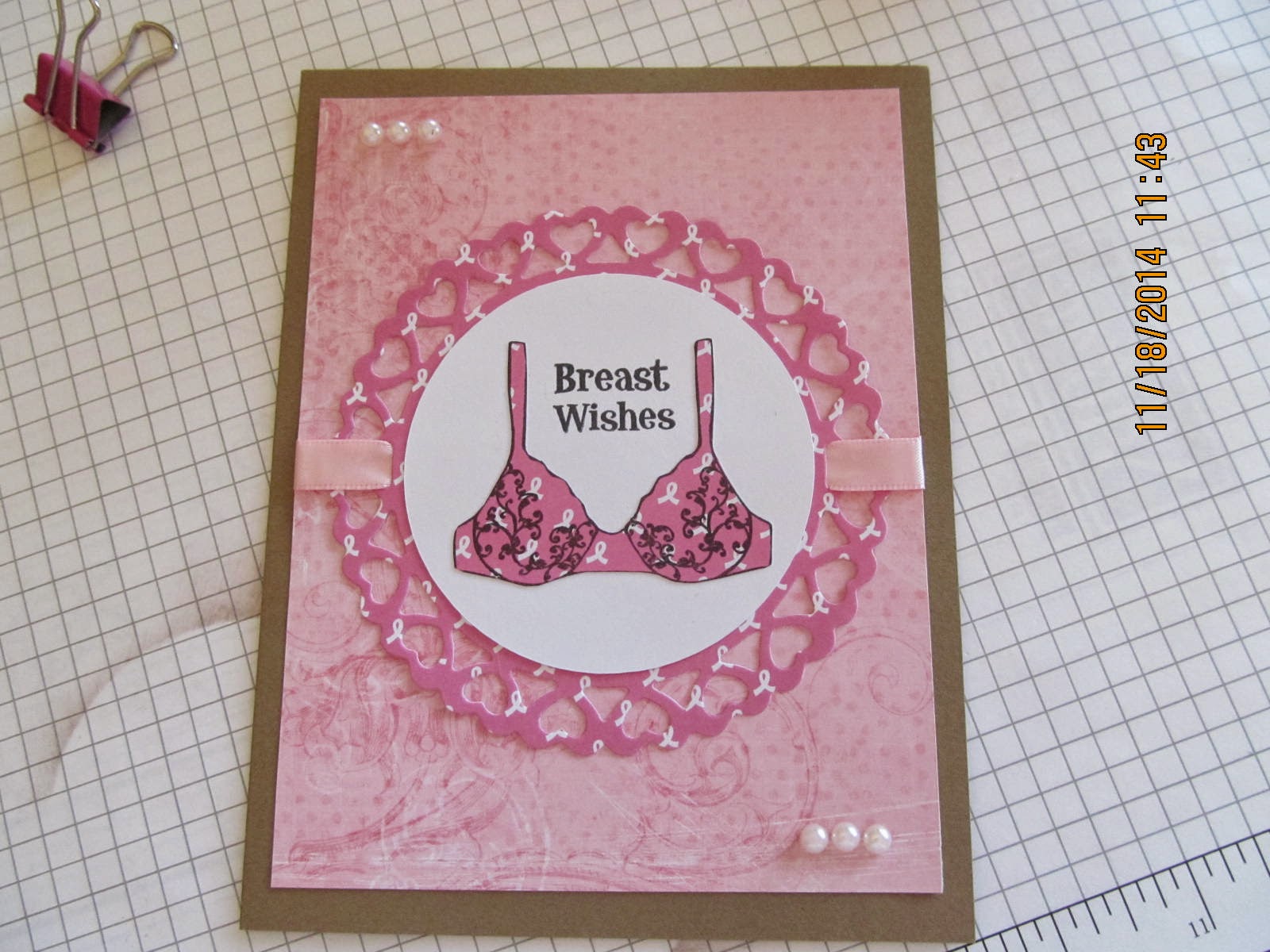 Isn't this the Sweetest!!  She's very talented, you should check out her blog,
really.
Well, not right now but when you are finished here.

Over at Splitcoaststampers, I had finished some more JAMS and here they are: 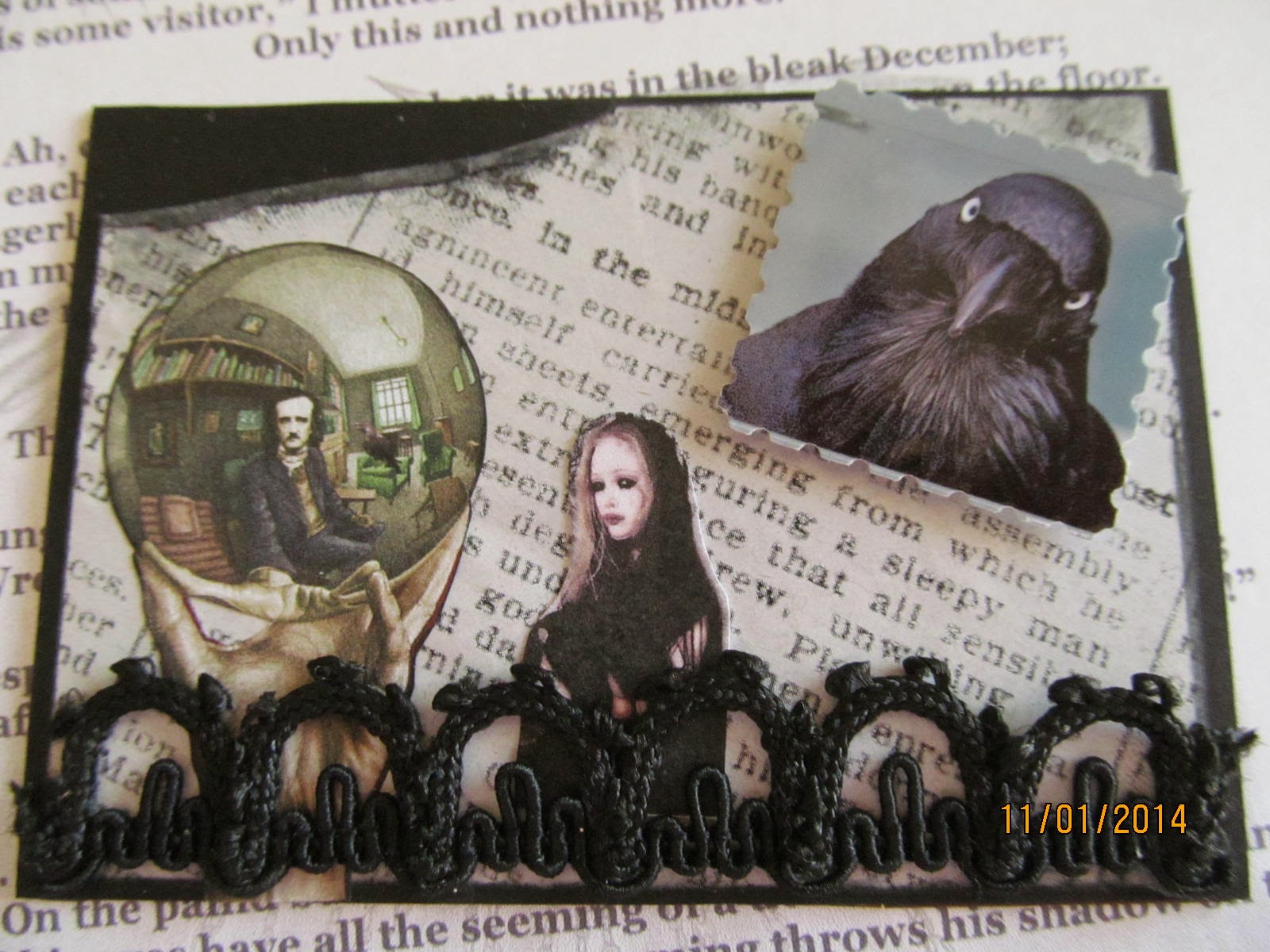 This one is "The Raven - Nevermore"  I gave it the title of "Lost Lenore"
My contribution was Lenore in the middle and the black lace.
I really like the way it came out, a little Gothic but not too much. 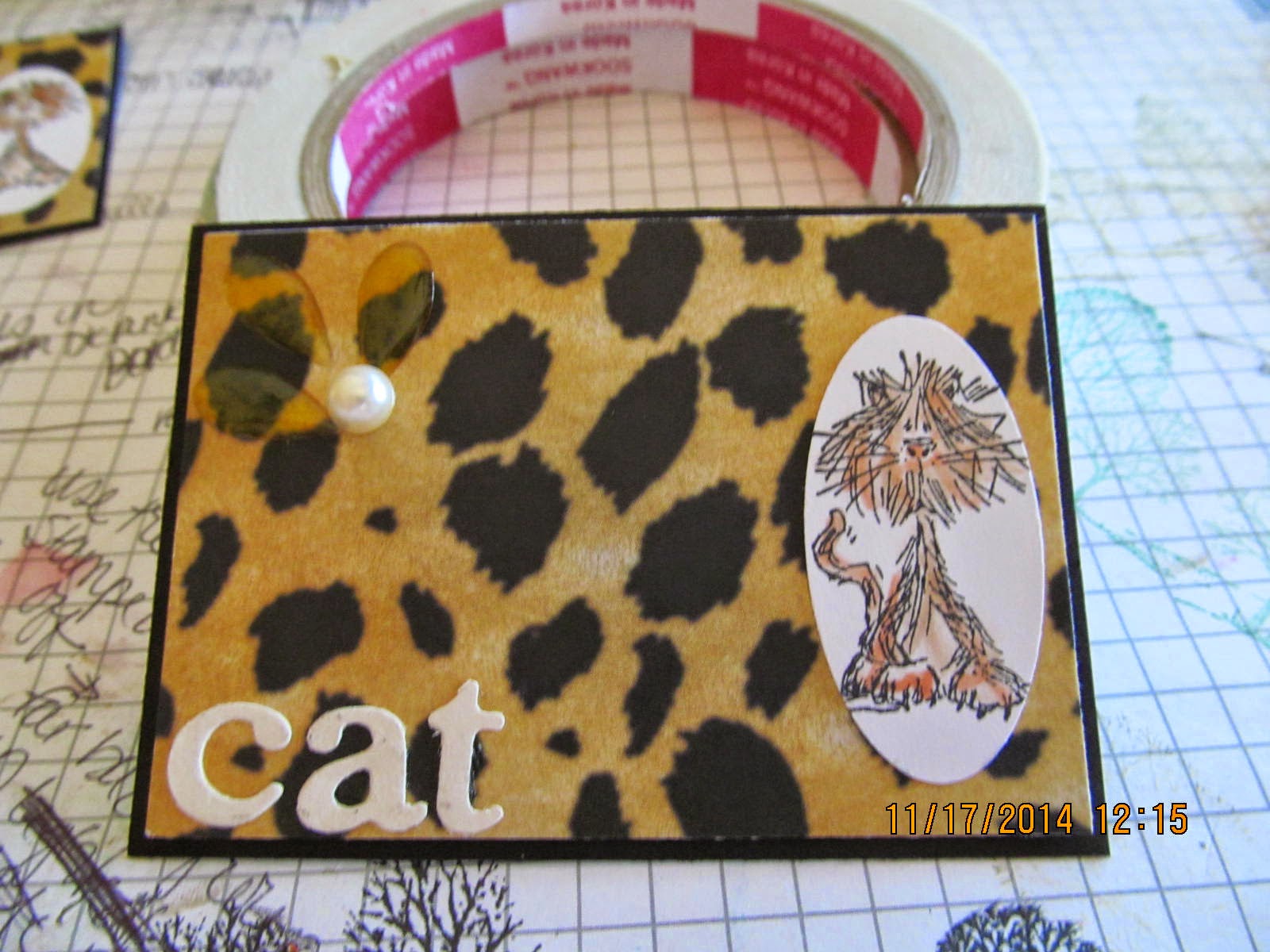 We are doing an alphabet series and this is - "C" is for -
I did the Frazzled Cat, because that's how I'm feeling right now. 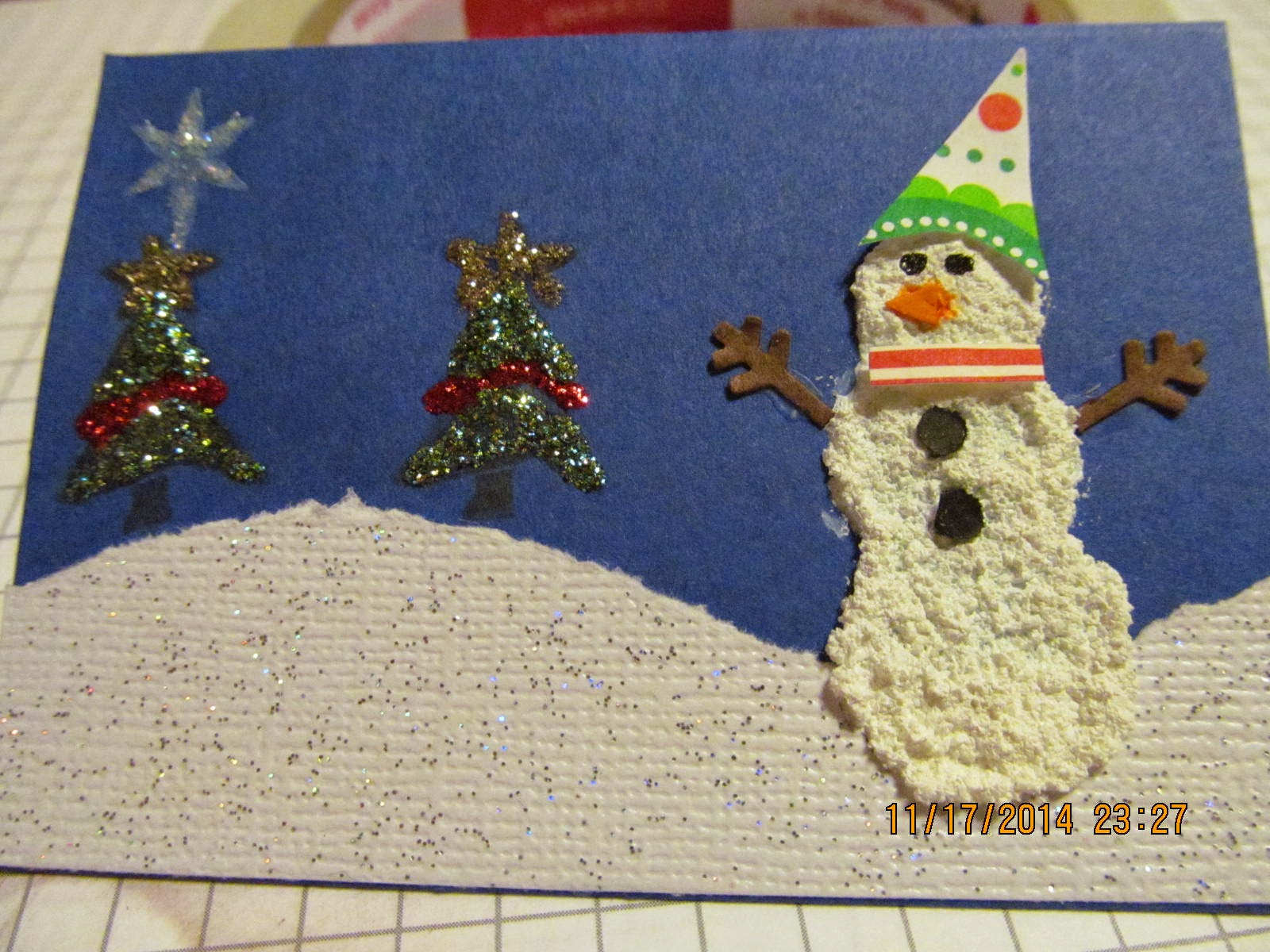 This was for Snowman Group 2
When I received it, the poor snowman was naked! So I gave him buttons, eyes,  a nose, a scarf, a hat and "antler arms" made from a Martha Stewart snowflake punch.
He looked kind of lonely so I also stamped the trees.  Then they looked naked!
So I dressed them up with stickles.
Stickles and brads seem to have been my - go to - embellishments lately. 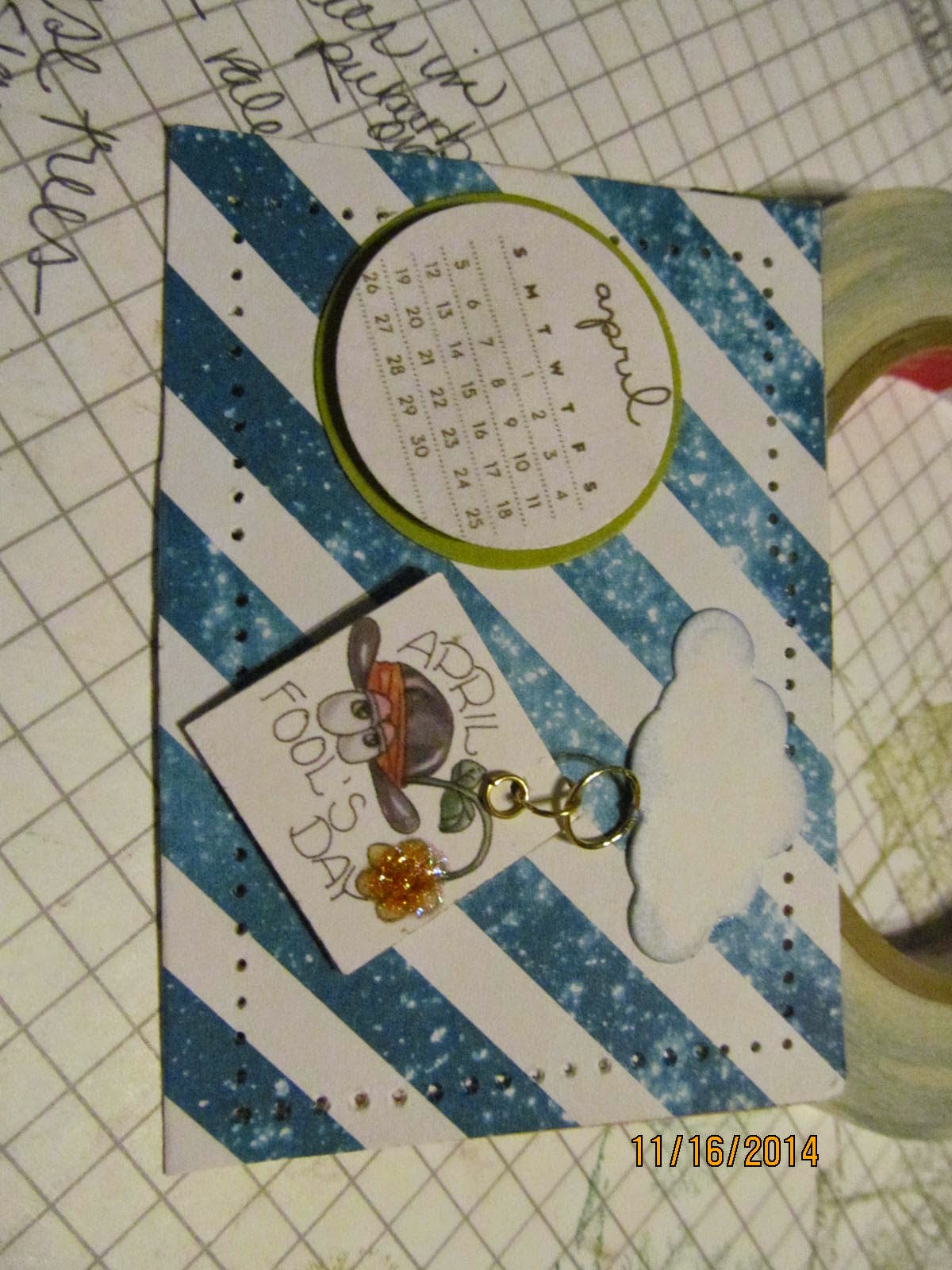 Ooops, I forgot to rotate this one.  These next pictures are from a Calendar w/inchies swap I did, again at Splitcoaststampers.  This one was for - April.
I don't remember who's background paper I used, but I thought it looked like abstract rain.  Yes, that's what I'm going with.  Abstract. 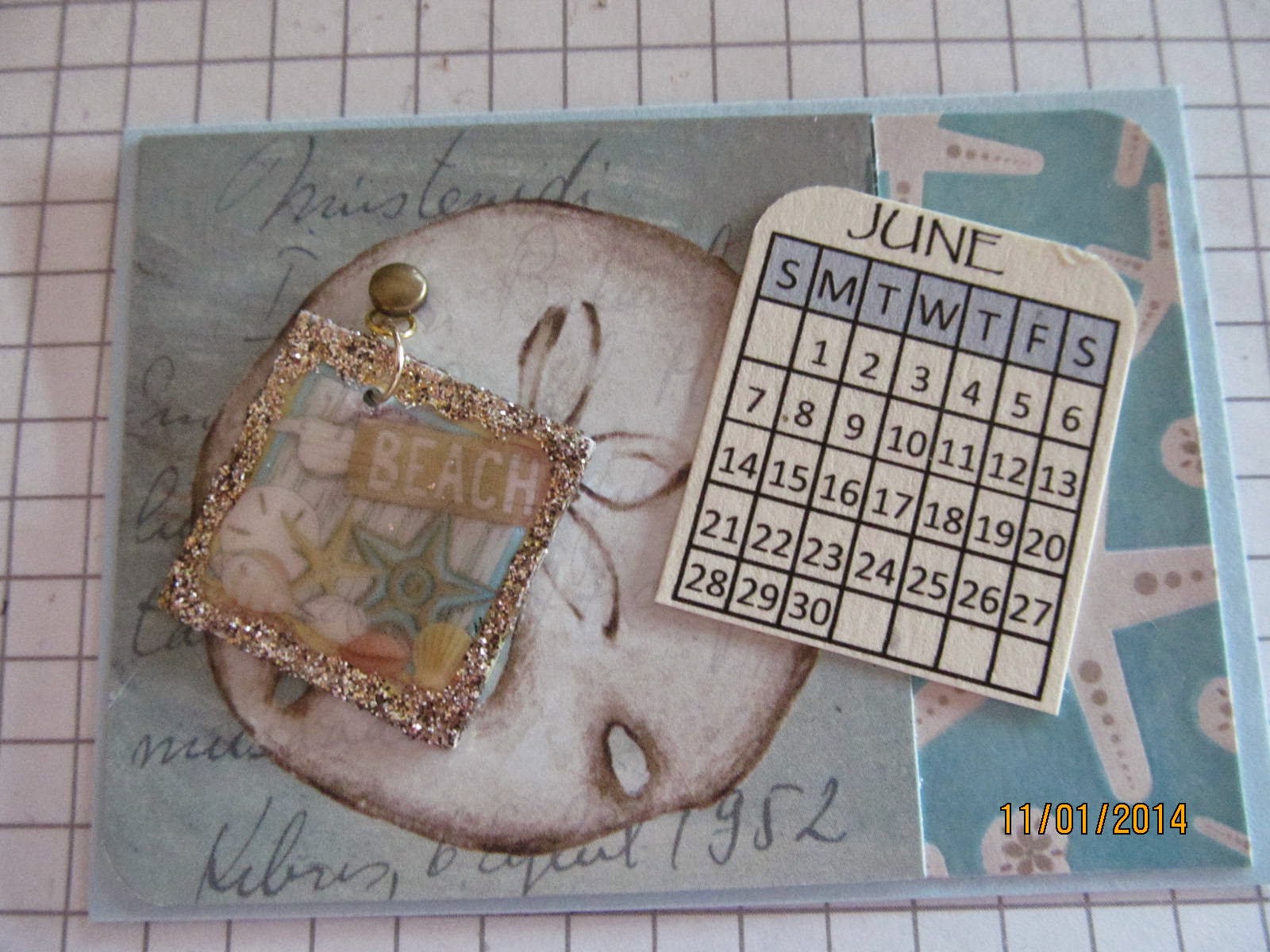 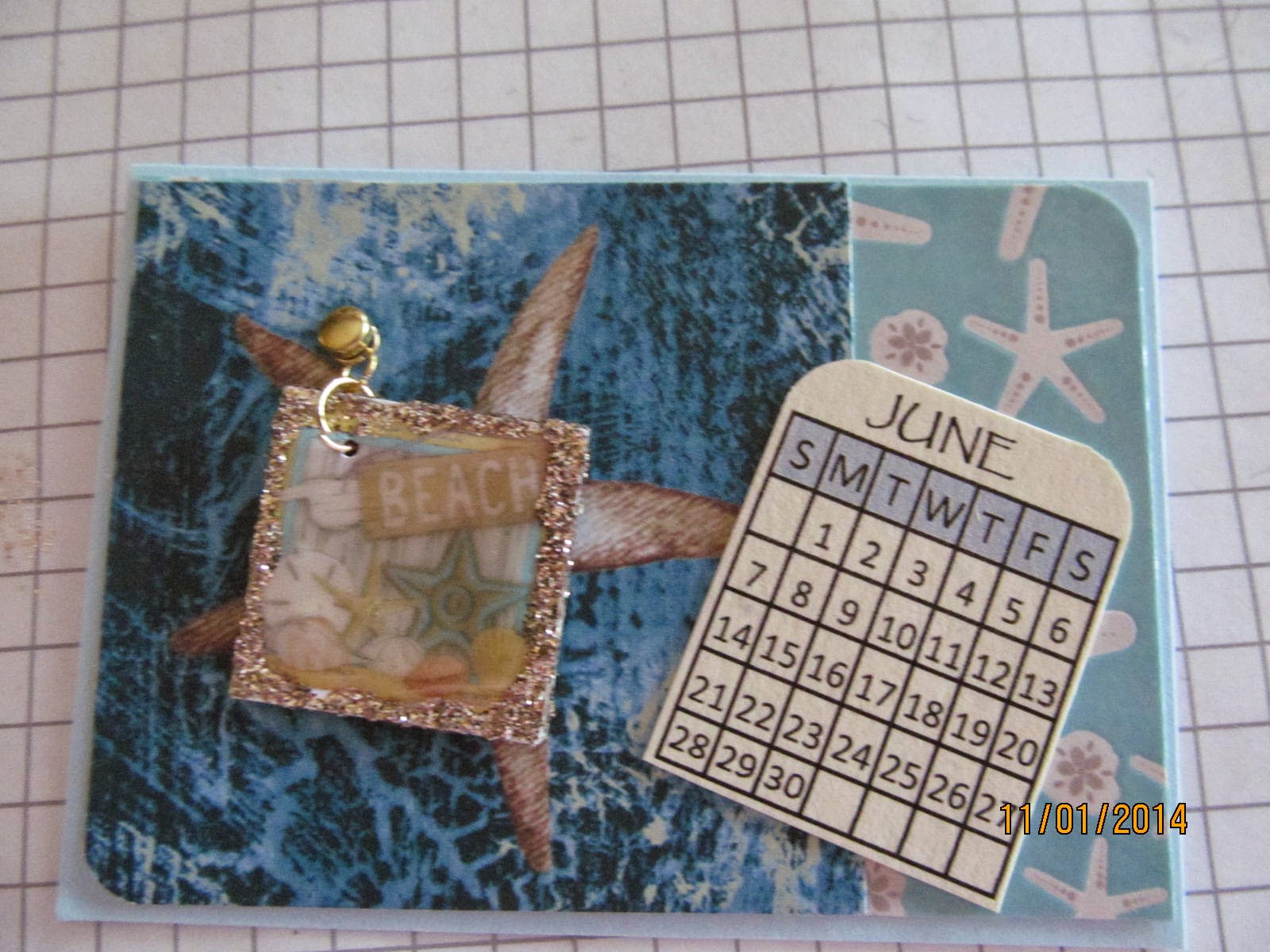 These two were for - June
The "inchies" on these were clip art that I had from PCCrafter - they are no longer in business.  Boy am I glad I had paid extra to have all of my orders put on disc's!  I then used Diamond Glaze over the image to make it look more like a tile, and used - yep, platinum stickles to boarder it. 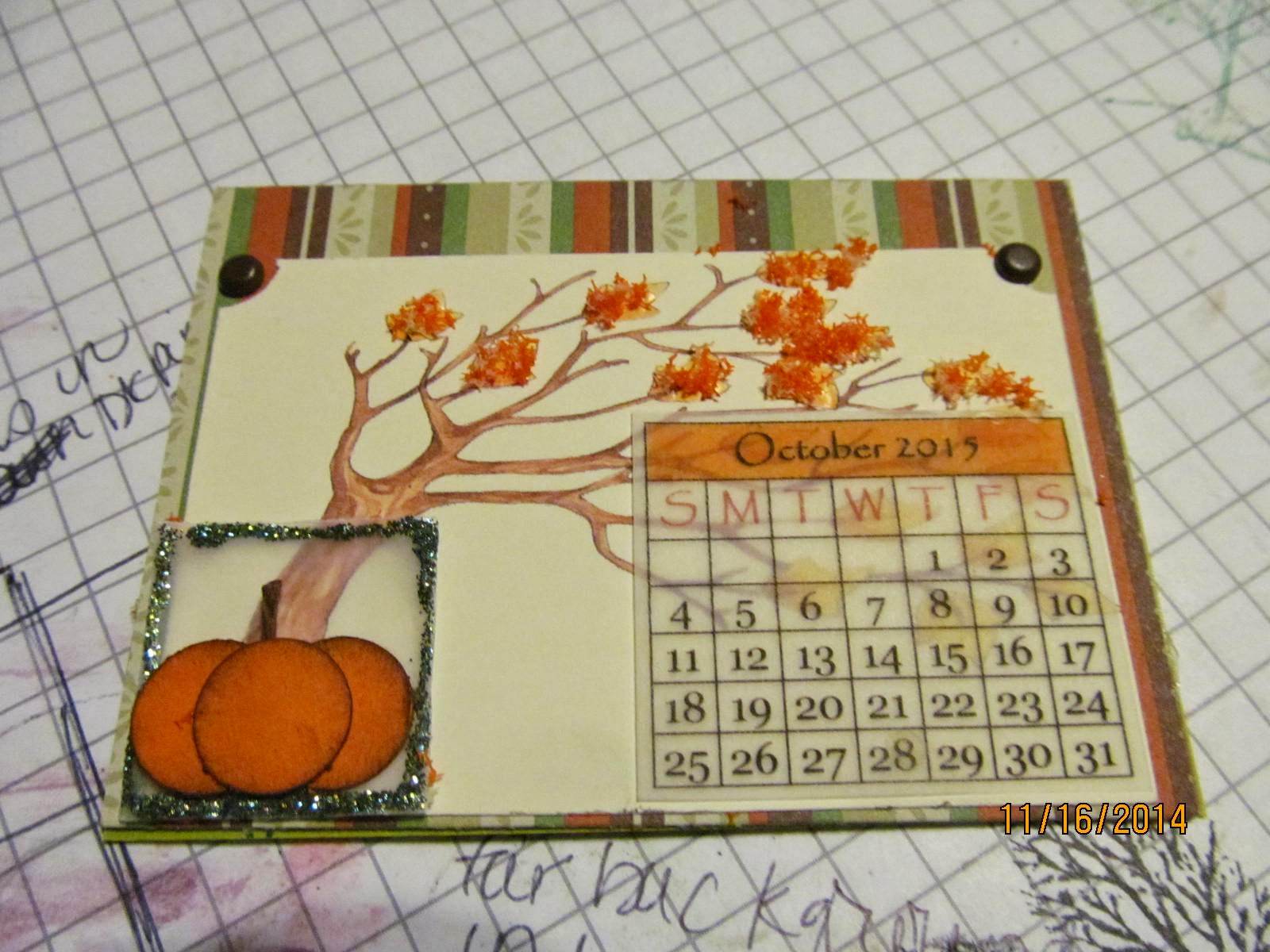 This one was for, wait for it -- October!
October was interesting,  I saw an image like this somewhere on the internet and then everything just fell into place.  I believe the image is from PCCrafter again.  I put flower soft on the leaves to give them dimension.  I never used flower soft before and had picked up a couple of jars in various colors from my LSS that they had on clearance.  I kind of like this medium.  I'm always jumping on the band wagon a little too late.  The calendar and inchie are on vellum. the pumpkins are distressed with ink and punched from a very old punch I had.  The stem is chocolate twine that I found at Wal-Mart.  The inchie is bordered with a green stickle.
I did one for December, but I can't find the picture.  I went with a RETRO theme. 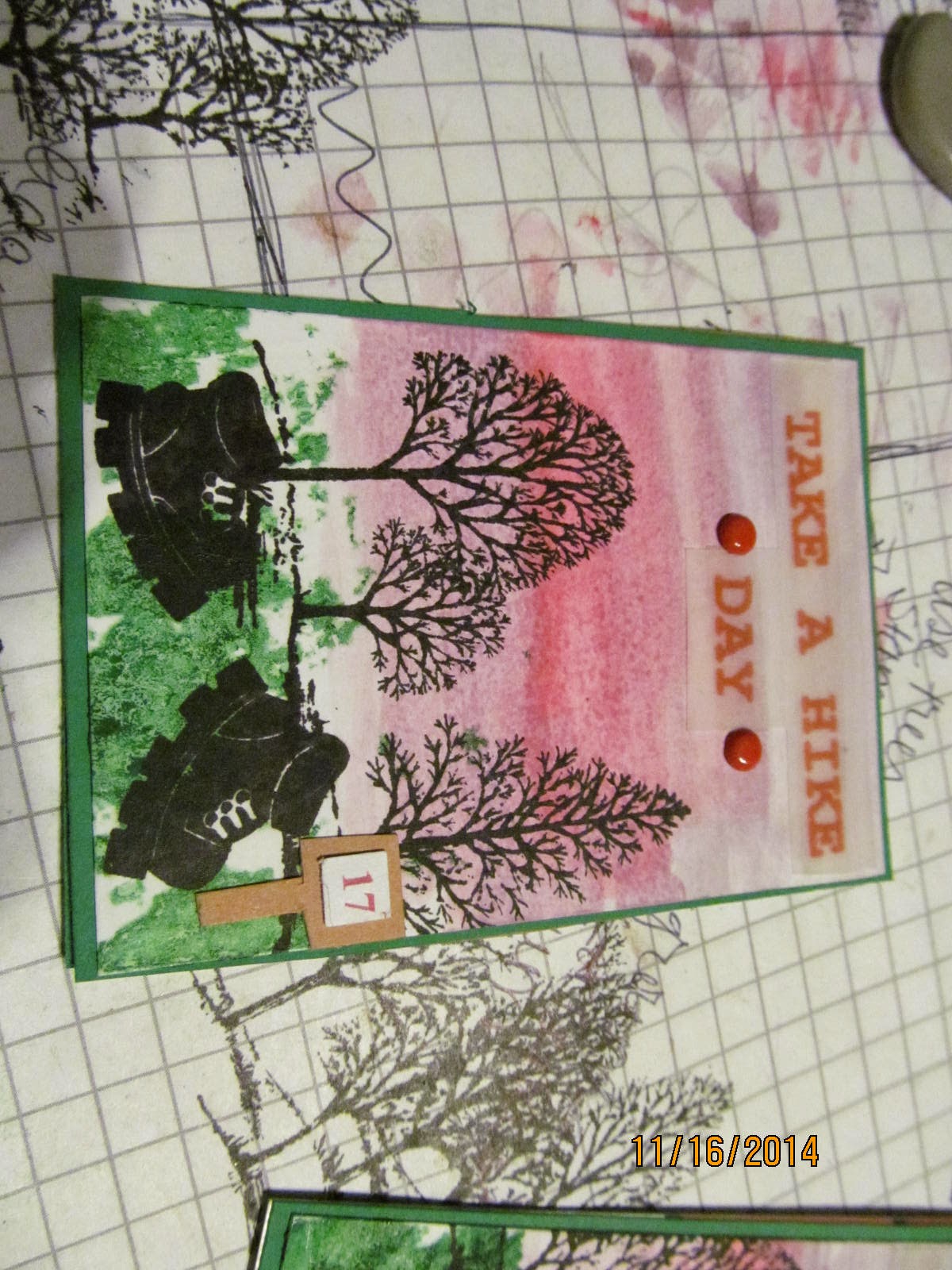 Another one I forgot to turn.  Good grief!  I think I'm tired, I mean after all it's 1:36am!!
These two cards are from another swap I was in.  It was called "PAT's, Pick A Theme.  This was a challenge version.  You had to use specific colors, you had to pick a "Wacky Holiday" from November, add the number (date) of the holiday and use melted crayons!
The top picture, the "grass" was the melted crayon and in the bottom picture I melted the crayon on whisper white and then punched a circle with in a circle and SU's large snowflake punch to make the "peace" symbol.  I then ran the pieces through my small XRYON to make them into stickers!  (Love that little machine!)  Brads were used for the obligatory embellishment. :) 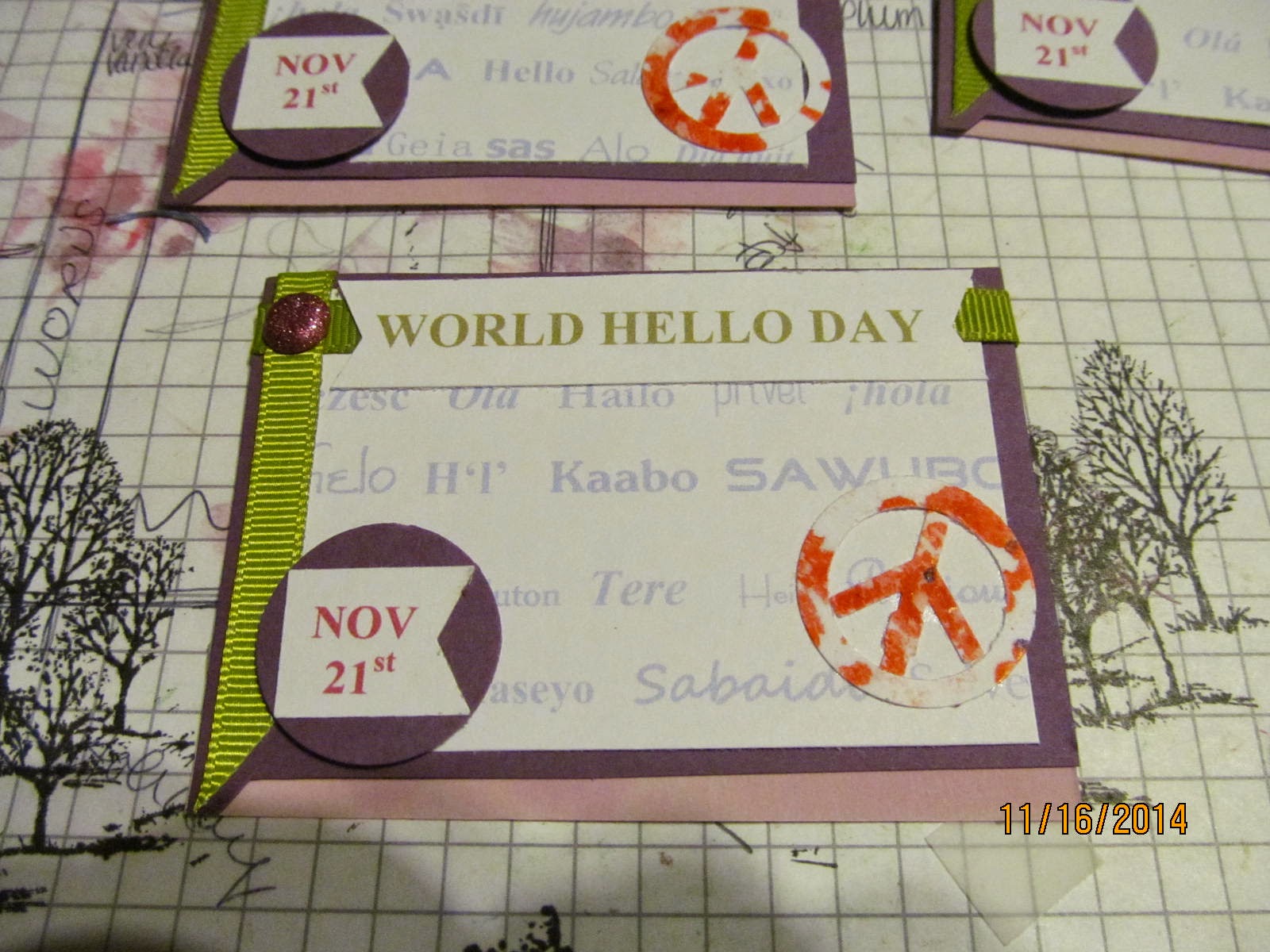 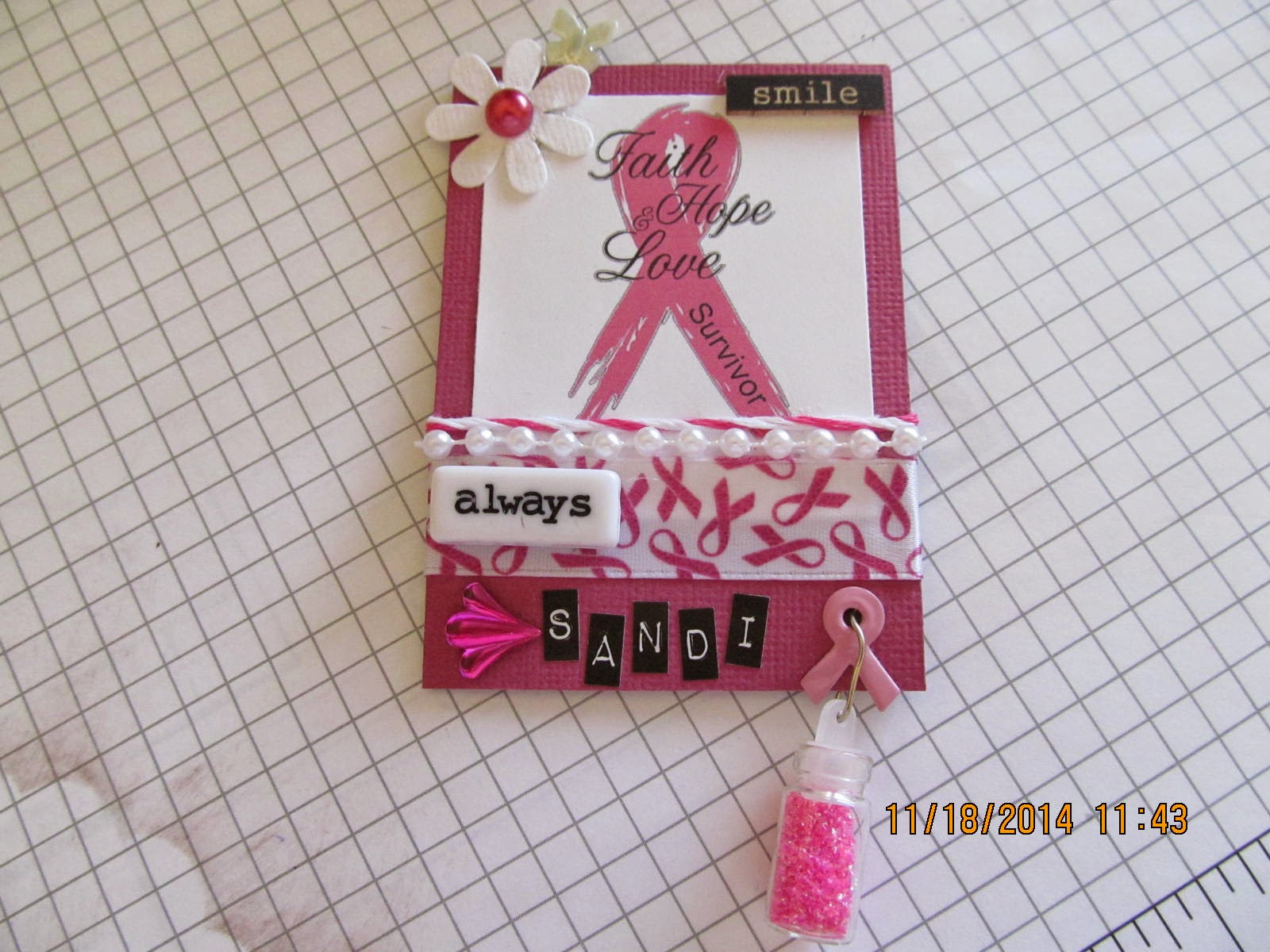 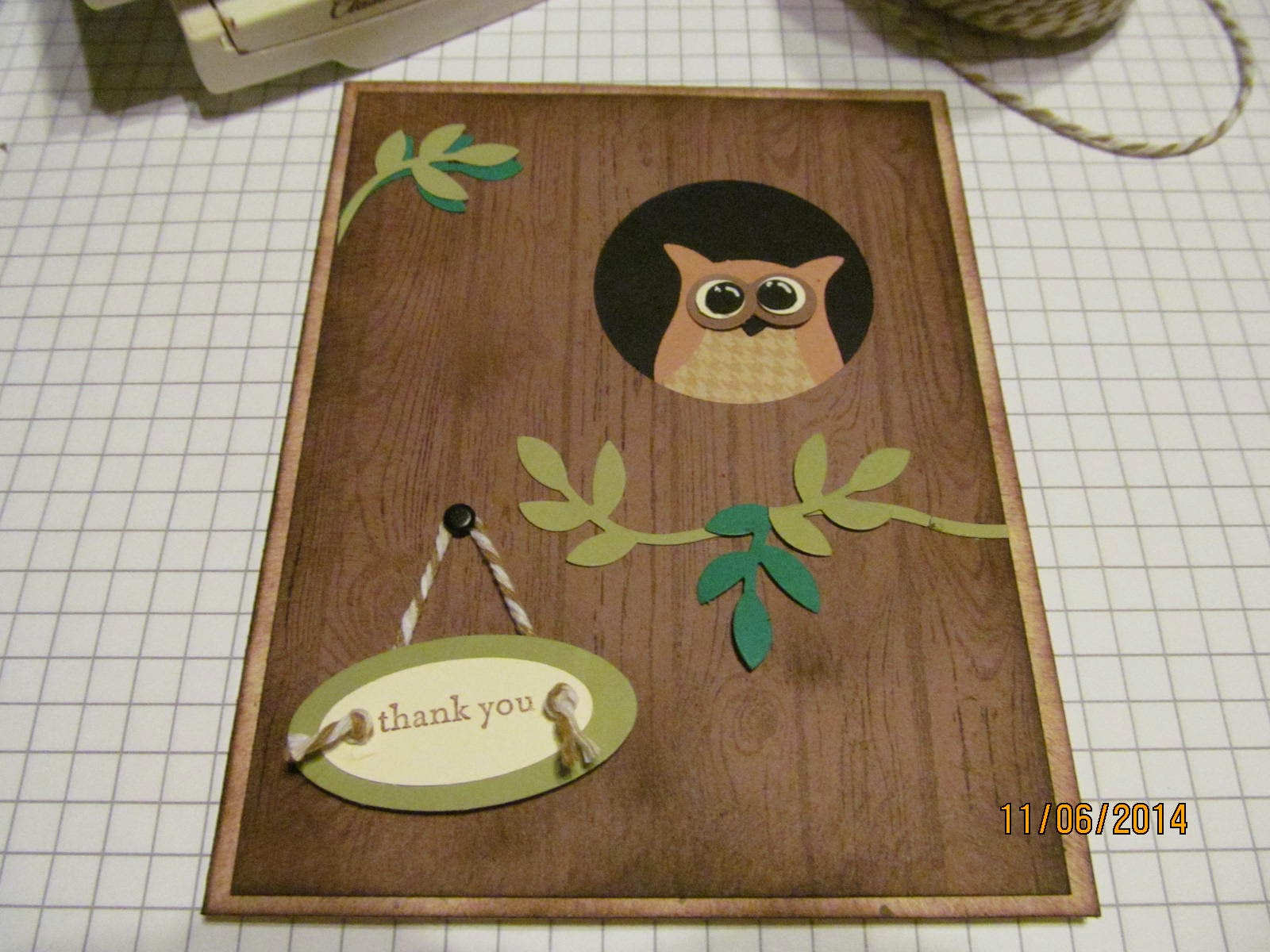 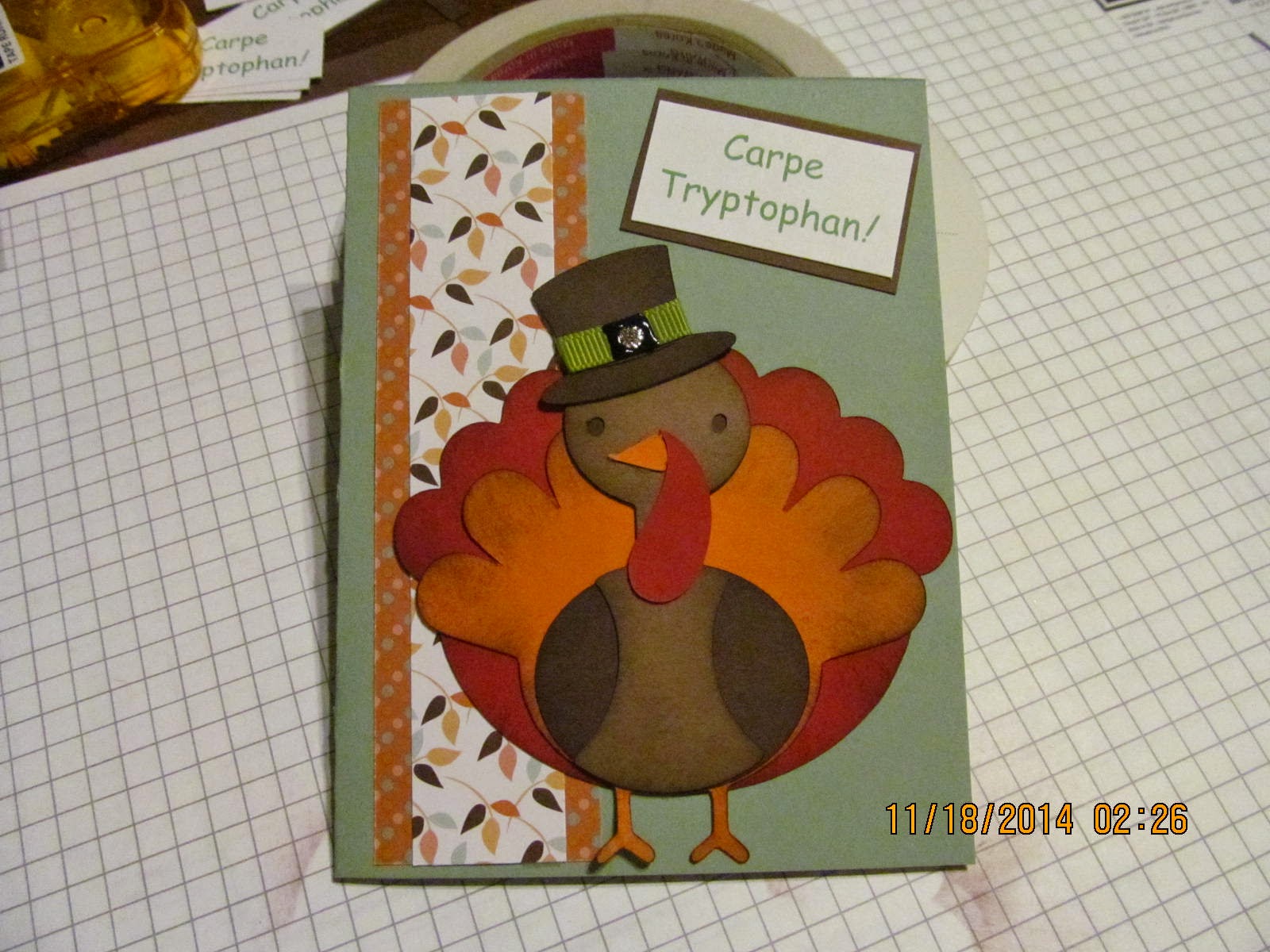 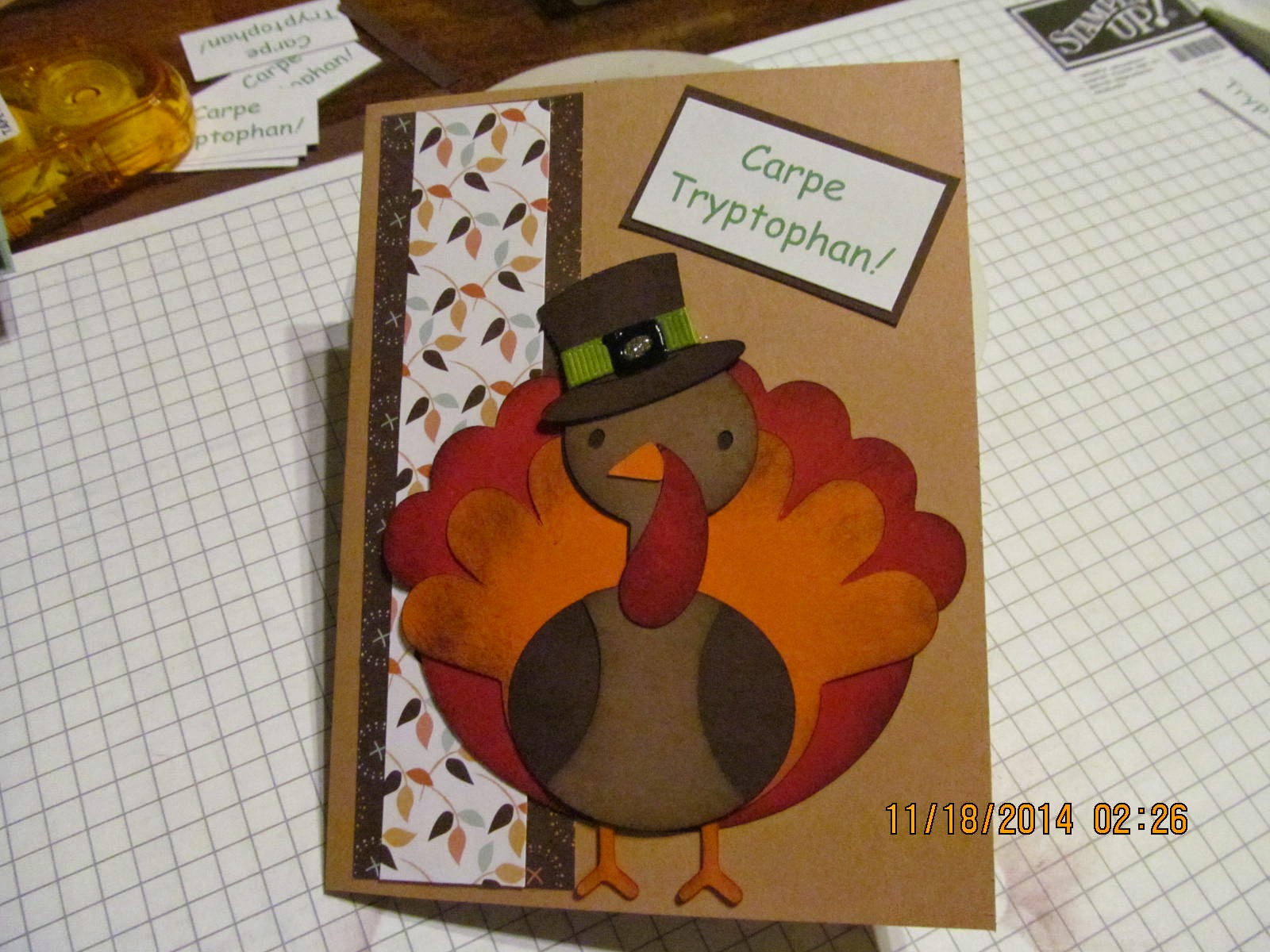 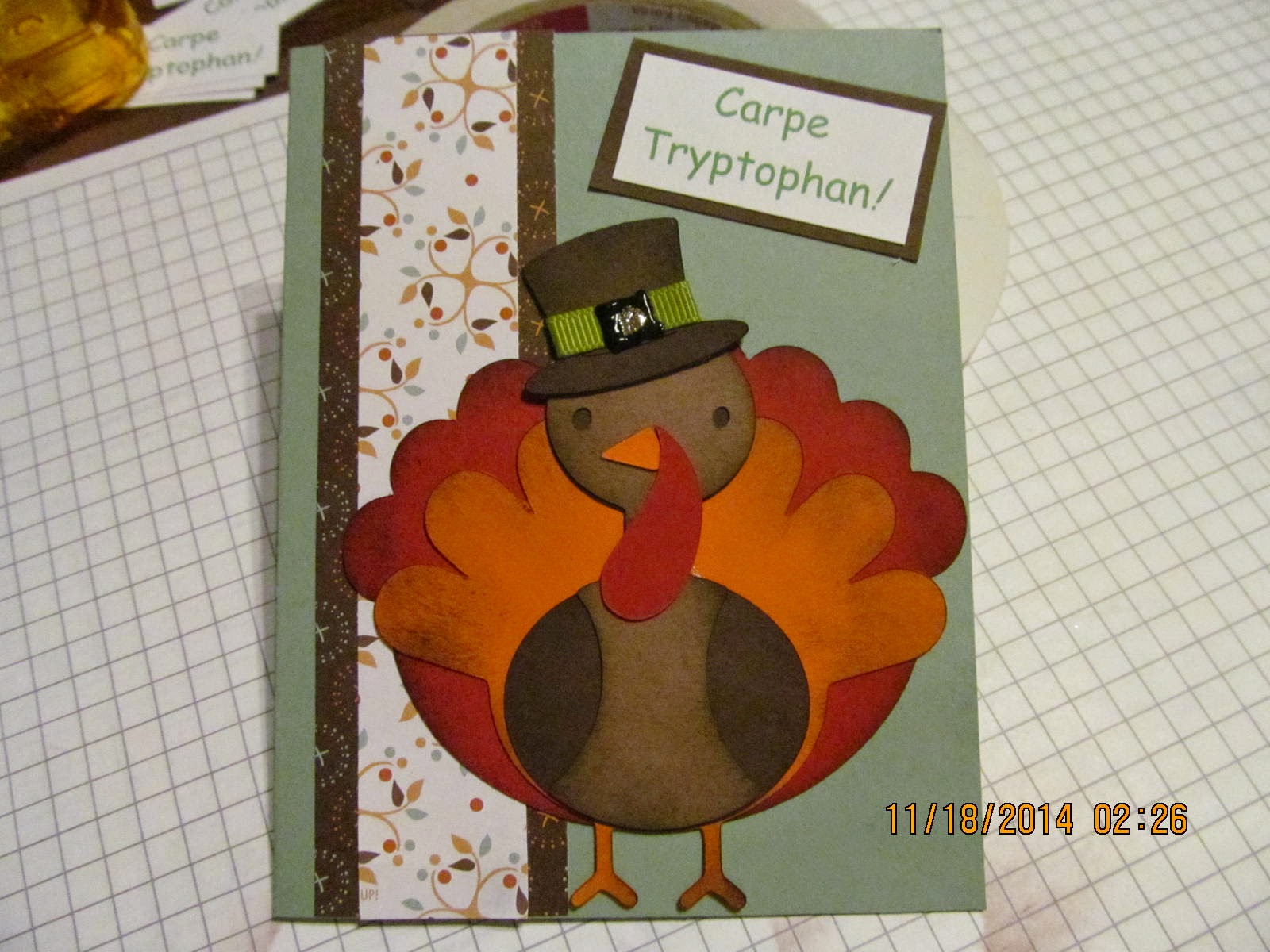 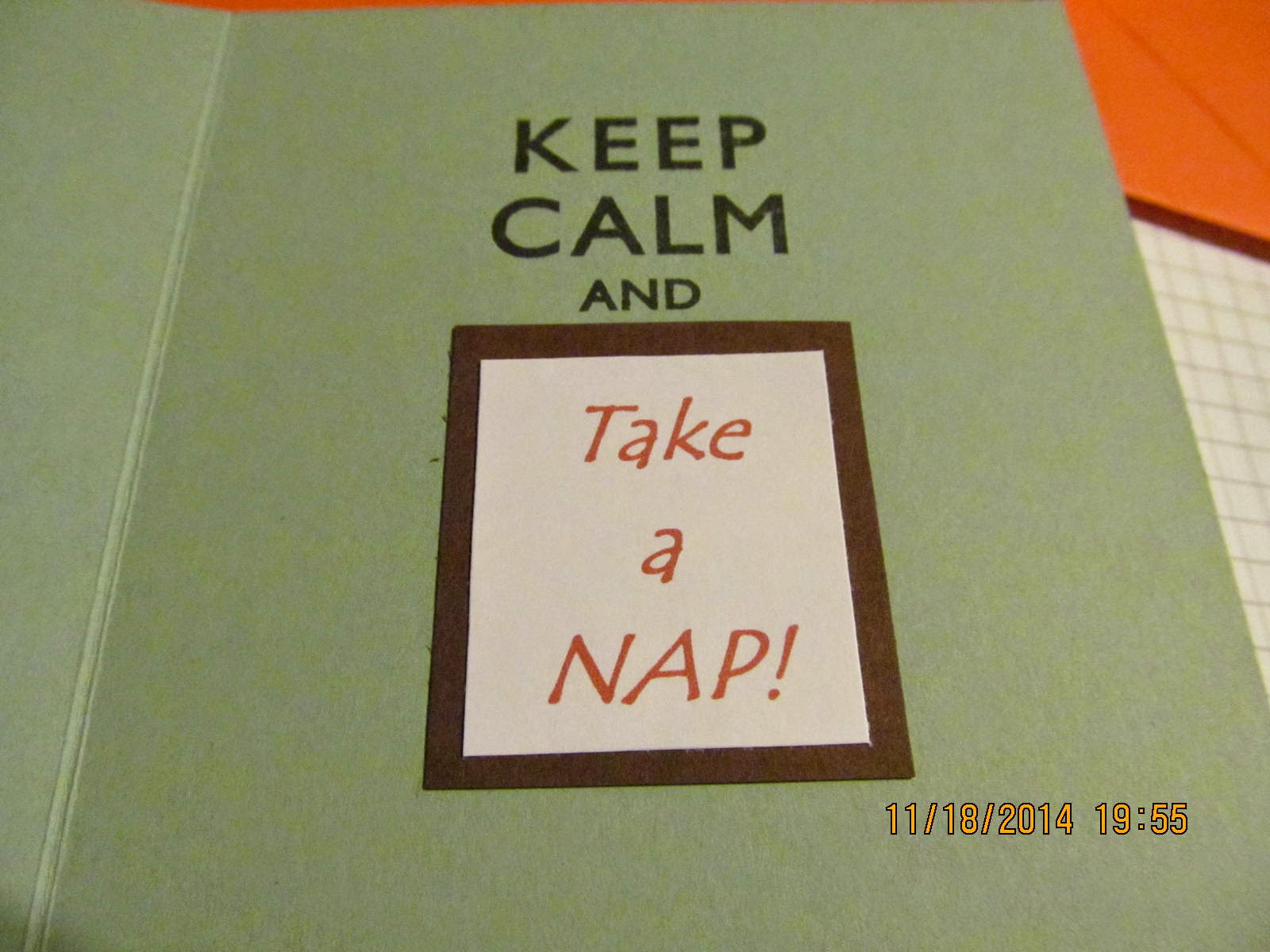 It was inspired by Evelyn's Turkey post.  I used my Cricut for this one, Some ink for distressing, Some SU Old Olive grosgrain ribbon, black slick paint, and yes some stickles.  The patterned paper is SU's Autumn Vine, it's retired and it's too bad too because I love this paper.  The wording on the front and in the "frame" on the inside is from the computer and the "Keep Calm and" is a stamp from SU.  It came out pretty cute, if I do say so myself.

Now for the last picture of the night, or morning... or whatever...
Our first snowfall of the season!!!
And yes, this is Texas and people did freak,
a little,
but it was over almost as soon as it started.
But I'm happy I stayed up to see it. 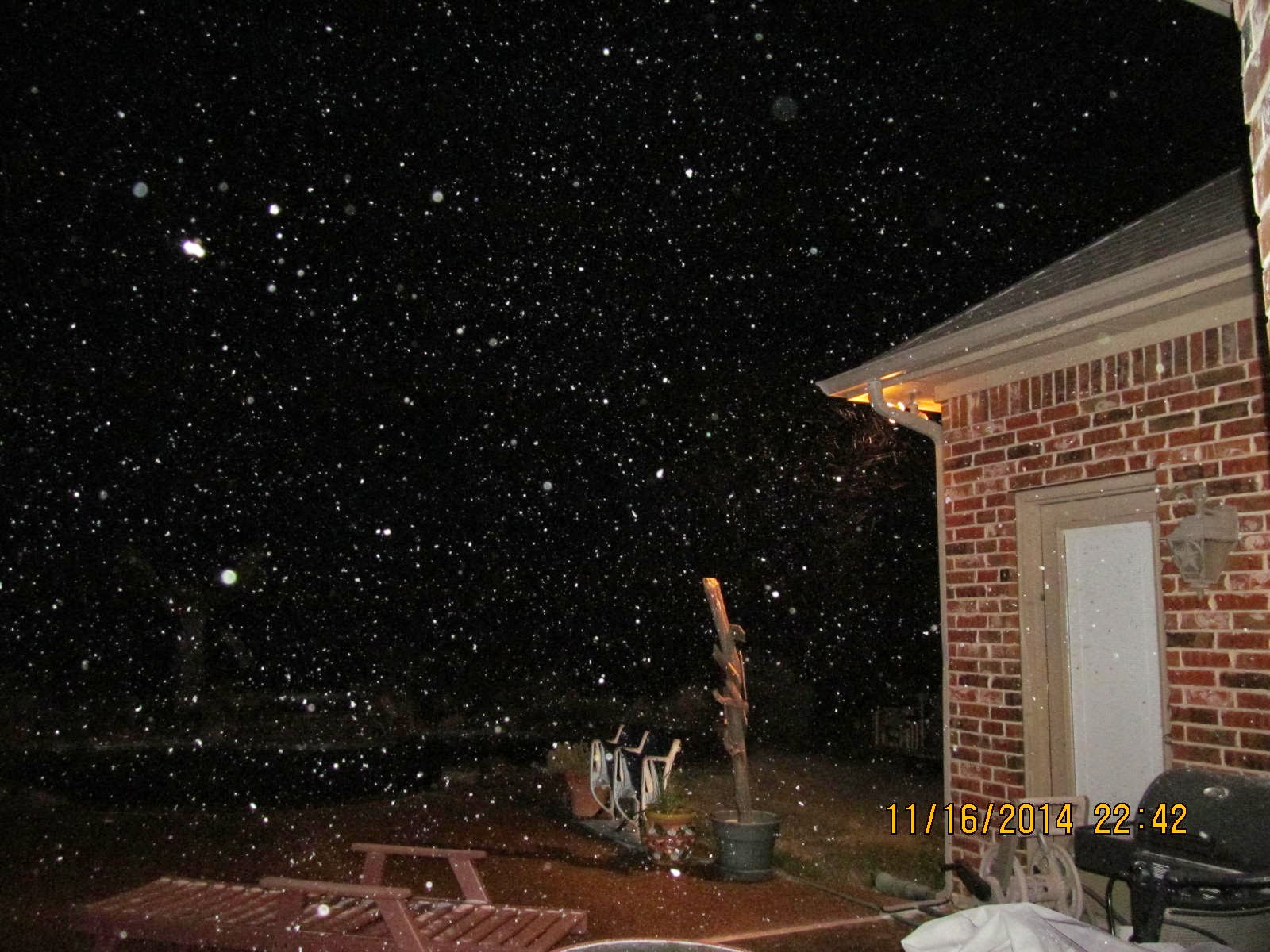 Hope You Can Cling To

Sandi
Hello! I am a Breast Cancer SURVIVOR! I am married, for the past 35 years to my High School Sweetheart. We have 3 wonderful boys and a cat who owns the place. We are transplant TEXANS - "we got here as soon as we could", my husband and I and our oldest son were born in New Jersey and lived in Barnegat, NJ for 5 years.